The Tacoma Station 8 Firefighters responded to a house fire and attempted to rescue an 11-year old girl. They got her to the hospital, but she tragically died from her injuries. To show their support for fellow first responders and the grief they certainly were experiencing, a board member of the Tacoma Police Union I.U.P.A. Local 6 went to a bakery to get cupcakes to deliver to the firefighters at the station impacted by the rescue attempt. When the owners found out what was going on, they donated the cupcakes.

Tacoma Police Union put out a Press Release thanking and praising Nothing Bundt Cakes owners Cindy and Steve Cullen for their generosity and kindness that meant so much to them and to the firefighters of Tacoma, “The community support means the world! Thank you, Nothing Bundt Cakes South Hill! We dropped off the cupcakes with a card & they brightened the day.”

When the International Union of Police Associations heard the news, International President Sam A. Cabral immediately started writing a letter to thank the wonderful couple for their concern and goodwill for first responders. In his letter, he stated, “We know that most of our communities support and appreciate our efforts to keep them safe. Your act strengthened that belief. It is people like you that are in our thoughts as we kiss our families goodbye and go off into the night.” 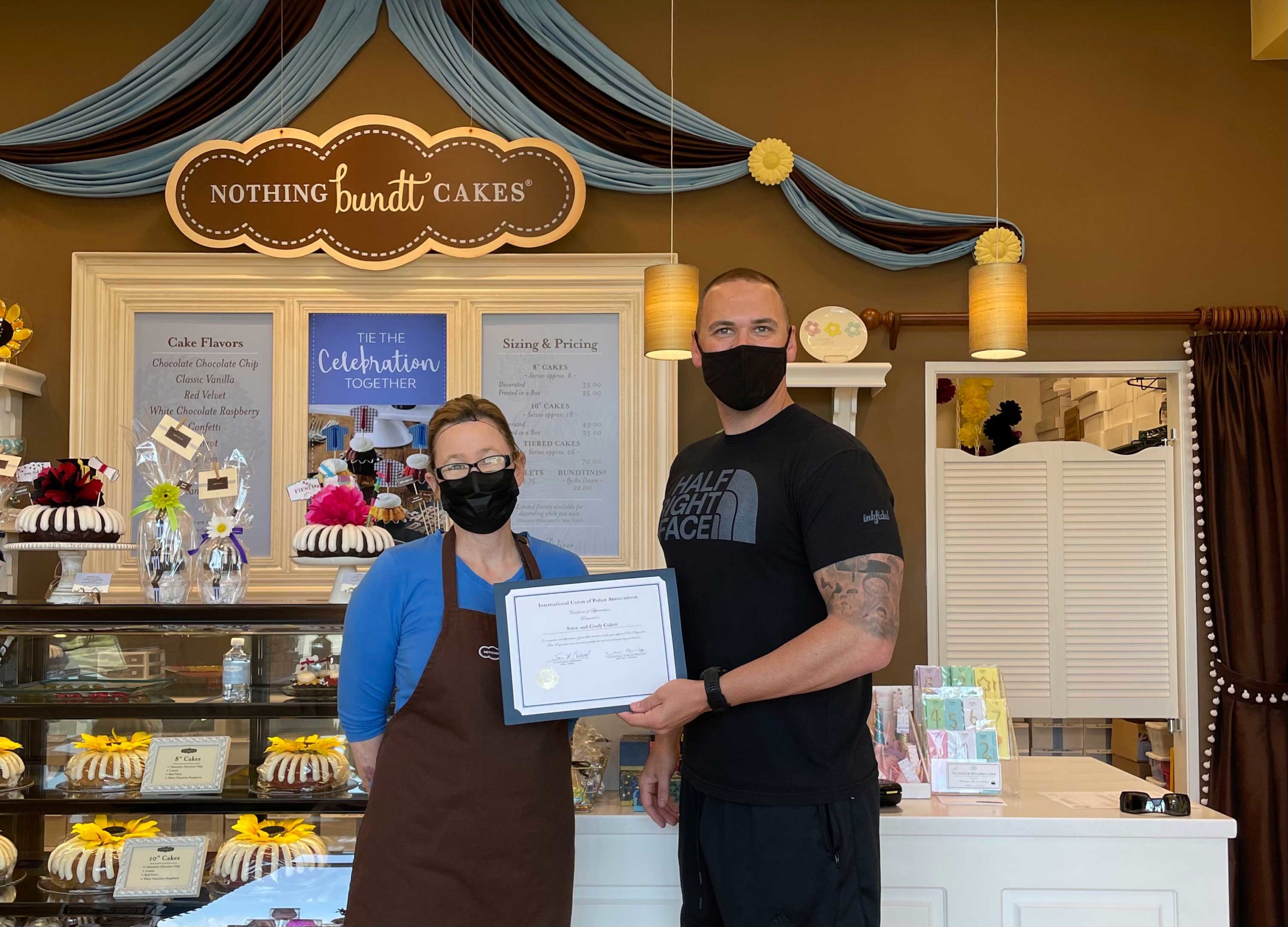 Additionally, International President Sam A. Cabral and International Secretary-Treasurer Michael V. Crivello drafted and signed a certificate, “In recognition and appreciation of your selfless donation and for your support of First Responders. First Responders across our nation greatly value and are encouraged by your kindness.”

Tacoma Police Union Board member Ryan Bradley, who arranged the original cupcake purchase, presented the letter and certificate to Cindy Cullen, “I just went to Nothing Bundt Cakes and presented the co-owner Cindy with the certificate and letter on behalf of the I.U.P.A. She is an absolutely friendly and happy lady, and told me I was going to make her cry when I read the letter to her and genuinely thanked her and her husband for their local business support to first responders.”

On the certificate, “In recognition and appreciation of your selfless donation and for your support of First Responders. First Responders across our nation greatly value and are encouraged by your kindness.” 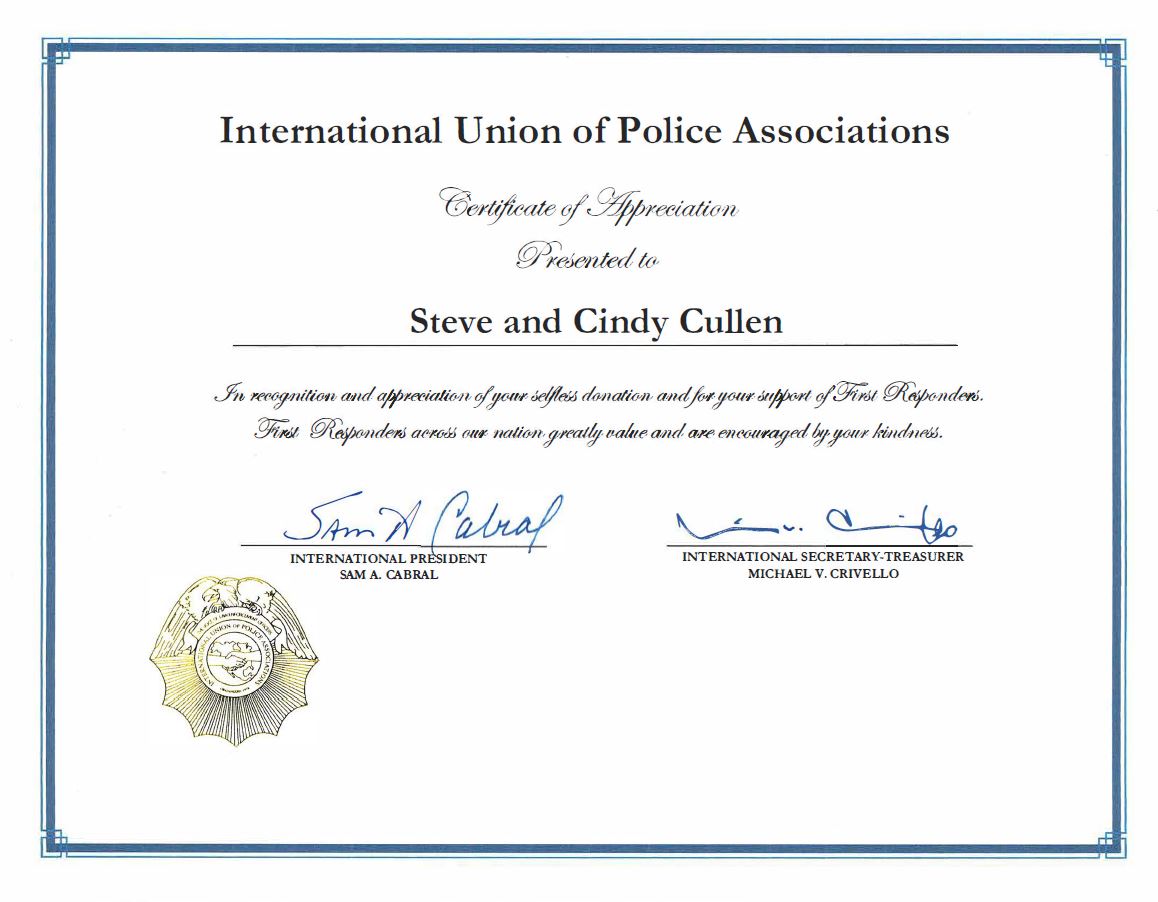 A Letter from President Sam A. Cabral

( Click the image below to view in PDF format) 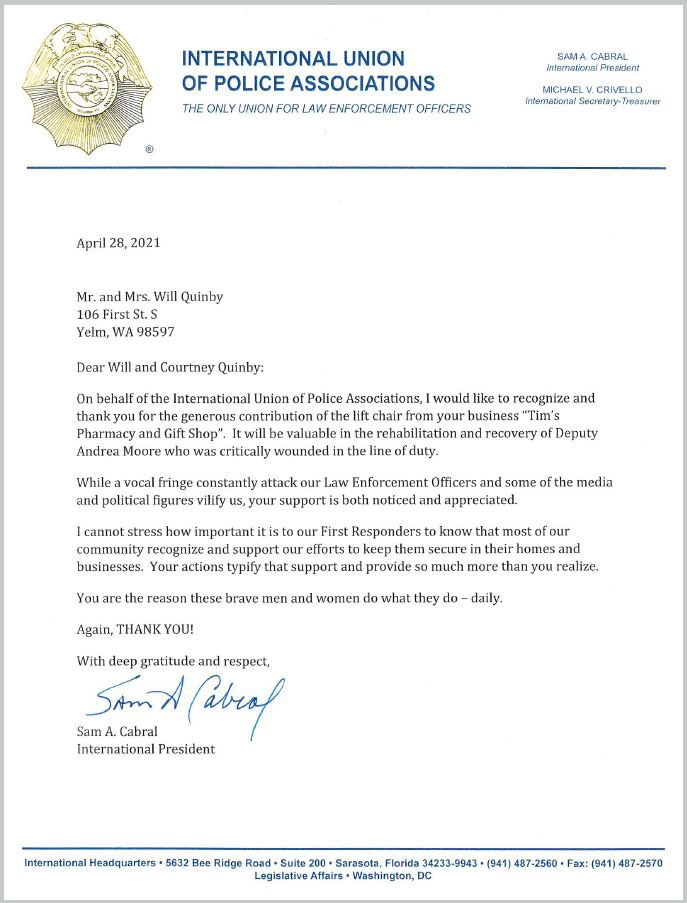