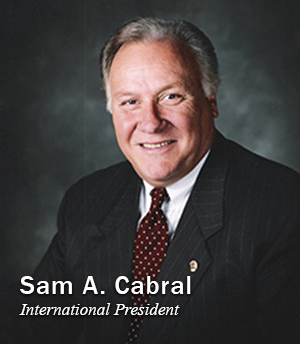 Sam A. Cabral was re-elected as the International President of I.U.P.A. in August of 2016. President Cabral began his law enforcement career with the Defiance, Ohio Police Department in 1965 and he retired in 1991 as a Detective Sergeant in charge of the Defiance Detective’s Bureau.

Sam’s law enforcement and labor background began when his peers elected him as the Chief Union Steward at Campbell Soup for four years before joining the police force. After joining the force, he affiliated the Defiance Police Officers with I.U.P.A. and became President of Local 166 in 1978.

His educational background includes attending Defiance College, University of Toledo where he earned his Criminal Justice Degree. He has studied at the George Meany Center for Labor Studies in Washington, D.C. and is a 1978 graduate of the 113th Session of the National FBI Academy.

President Cabral has testified before the United States Congress promoting legislation designed to improve both law enforcement policy and the conditions under which police officers work. He has guided legislation that has directly, or indirectly, affected law enforcement officials, such as being appointed in 1994 to the Congressional Commission on Crime Control, responsible for developing the 1994 Omnibus Crime Bill.

In addition, Sam ensures that I.U.P.A. is the front-runner in being the members’ advocate on local, state and federal issues that are important to law enforcement. Many issues that he has fought hard on include an increase in the number of officers available to police departments, the rights of police officers, age discrimination, as well as overtime pay cuts.

Michael V. Crivello started his law enforcement career in 1986 with USAF Security Police.  During his career in the military/National Guard he deployed to over twenty countries.  He served at the Pentagon and State Headquarters; he was forward deployed in response to the 9-11 attacks; and retired as a Command Chief Master Sergeant in 2009.

Mike Crivello retired from the Milwaukee Police Department after completing greater than twenty-seven years of service [1991-2019].  Throughout his career, he had worked many assignments starting in patrol; was on the ground floor of the creation of the, now, very credible beat/bicycle program; served on a Federal Task Force; performed undercover work in the Vice Control Division; while working in the Sensitive Crime Division, he specialized in crimes against children; he worked various assignments in the Criminal Investigations Bureau; and he also served as an adjunct instructor, specializing in Defense and Arrest Tactics (DAAT). Mike completed his career in the promoted rank of Detective.

Mike has been a successful Milwaukee Police Association Steward and Trustee, with an undeniable focus toward membership care. He served as the Union President from 2010-2018.  As President, he was the Chair of Bargaining, Executive Committee, Fire & Police Commission relations, Legal Claims, Public Relations & Publications, and an Ex Officio of all other committees.  As President, he was also a registered Lobbyist.  With many successes and accomplishments – under his leadership, he maintained collective bargaining for public safety, lifted the salaries of his membership greater than twenty-seven percent, and repealed a seventy-eight year draconian law which prohibited the individual choice of residency – members were finally permitted, by law, to live beyond the limits of the city boundaries.

Mike currently serves the members of the I.U.P.A. as the International Secretary – Treasurer.

“ It is an absolute great honor to be associated with the finest men and women of law enforcement – members of the I.U.P.A. It is my personal pledge to work tirelessly to ensure the greatest level of care and assistance to our Locals. ” 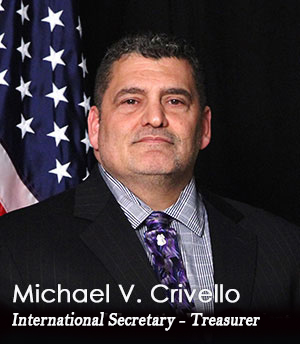